Scientists are good at developing hypotheses, making detailed observations, and using careful observations to make inferences. In the field of evolutionary biology scientists use these skills to learn about the relationships between different organisms. By carefully observing the characteristics of all living things, we can infer the relationships between them and make predictions about possible common ancestors.

Making Observations and Inferences: What do you already know? 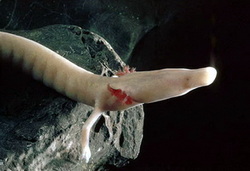 Group discussion: What is the difference between an observation and an inference?

USING OBSERVATION AND INFERENCE TO MAKE A CLADOGRAM: